AOE(BTLF) - The Battle of Guise

This is an interesting battle. In modern cold war doctrinal terms, the French were conducting (even if they didn’t know it or have the intelligence to support it) a counterstroke operation; in other words a counter attack against a moving enemy to destroy the enemy. The British heavy cavalry attack against the flank of D’Erlon’s Corps at Waterloo is also a counterstroke. 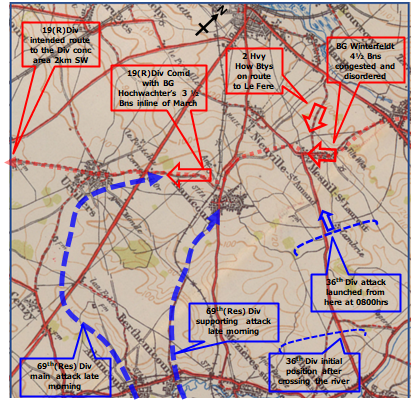 The attack by 35th Div was not conducted with a great deal of urgency. The 69th Res Div attack, however, was far more vigorous, but in the end was beaten back by the power of the German arty. Apparently the Hvy Hows that arrived each fired off over 100 rounds of ammunition! By late morning the 18th(FR) Corps Commander called off the attack, in part to the lack of progress by the Corps on his right flank. The Germans then started to counterattack and in doing so managed to push the French back over to the eastern bank of the River Oise.

I thought I would say a few words about the terrain for the battle. I located a BEF 1:100,000 map for the period. This nicely showed the terrain features. I downloaded a segment of the map and printed it and coloured in with highlighter the important contours. This enables one to get a much better picture of the terrain, and especially here the 120m contour line shows the overall flatness of the terrain, but cut with valleys going south and east and north and west.

I then overlaid over this map my available hills to scale to approximate to the ground. 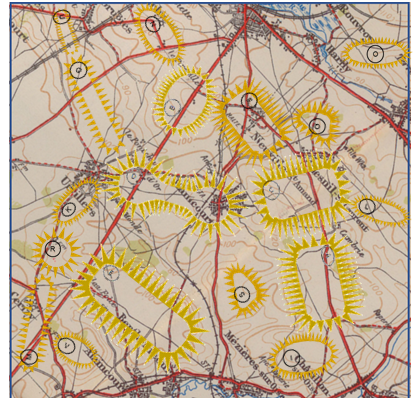 I then added extra layers between the hills to flatten out and join the hills into one main plateau. 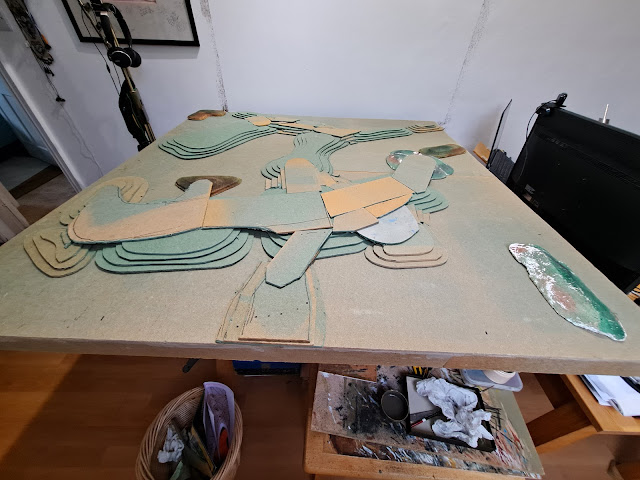 I then covered it with my olive cloth, and laid out the villages, first, followed by the main roads in grey and the secondary roads in brown. 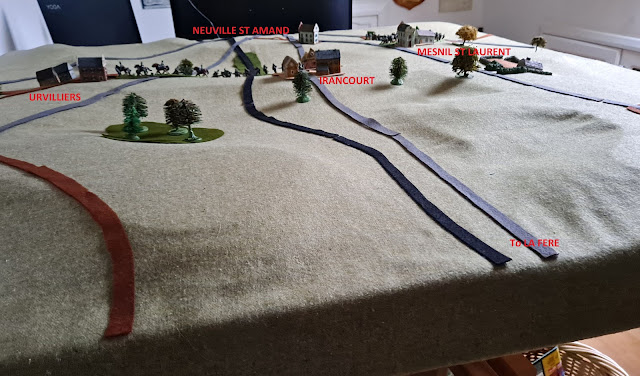 I used the Age of Eagles 1914 module for the game with my own adaptations. Further adaptations for this game were:

I reduced the firepower of infantry between 4 and 12 inches (remembering that 12 inches is over 2000m). I do not believe there is any justification for significant long-range fire effect from infantry. The most that could be achieved from such fire would have been harassing area fire I reduced the Germans to a factor of 1, and the French to 0 (but this increases to a 1 because they had integrated machine guns). If the British had been deployed, then they would be on the same factor as the Germans at this range. Given the weight of shells it therefore would not be unreasonable for these batteries to have a good fire effect against French 75mm batterys.

As with my adaptation for indirect fire I gave each battery a factor of six as they were 155mm howitzers. I also gave them a minimum fire range of 15 inches.

This was a significant decision. Where would I deploy the French which surprised the Germans. I decided to place them 12 inches away from MESNIL ST LAURENT deployed for battle. The German were deployed partially in open order to represent picquets, and the entire formation disordered because of the traffic congestion in the village. I decided to leave it to fate, and the initiative dice, to see who would move first – The French got lucky and were the first player!

Doctrinally I decided to employ the French very much as they were used in the early battles of 1914. With bayonet charges against German positions. 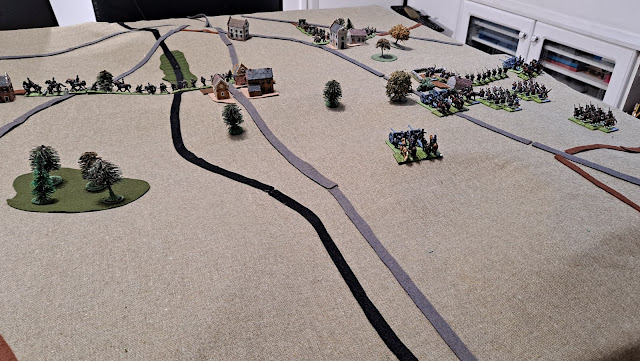 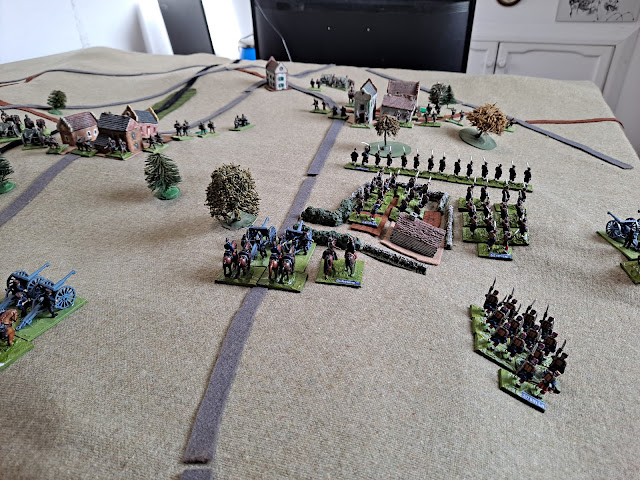 GE Hvy How silences a 75mm battery, and a further battery is silenced by accurate rifle fire from IRANCOURT. BG Winterfeldt open fire on 35e IR causing a casualty and disordering them, and they are forced to retire. Meanwhile in response 49e IR and 12e IR charge en bayonet in column against MESNIL ST LAURENT in a coup de main attack. 49e IR suffers 3 casualties and flinches and retires from the flanking fire from IRANCOURT. Meanwhile 12e IR on their right flank only take a single casualty and close to contact. In the assault they are beaten back by the Germans, and retire to lick their wounds. The FR arty silence BG Winterfeldt’s MG co. 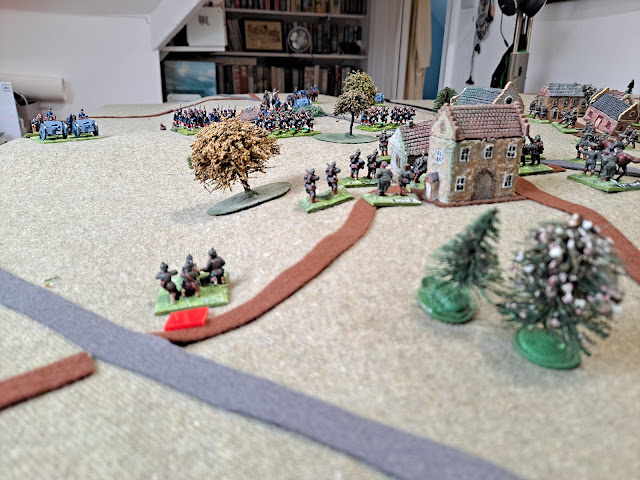 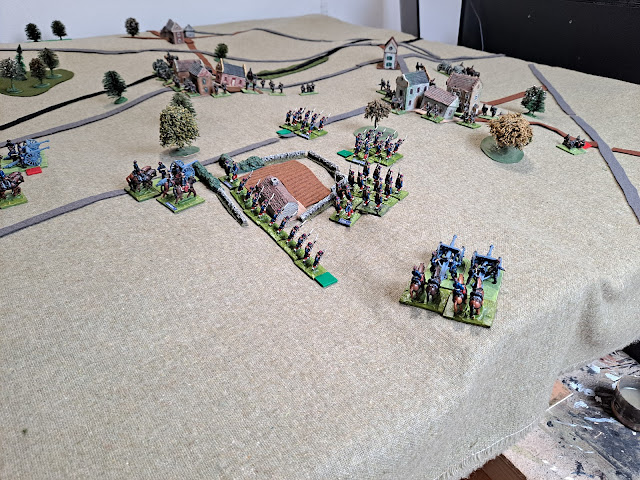 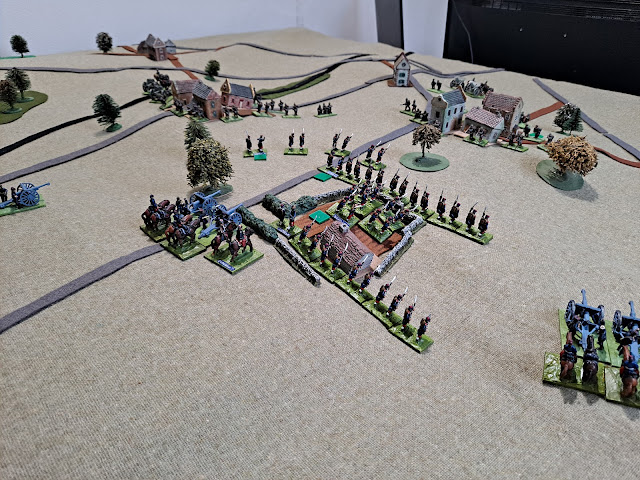 69th Res Div arrives and starts to advance on URVILLIERS. BG Winterfeldt abandon MESNIL ST LAURENT, but the 36th Div are oblivious despite the apparent slackening of rifle fire and do not follow up. While they halt and wait orders the 18e IR take punishing fire from the Hvy How and flanking fire from IRANCOURT and lose 2 cas. 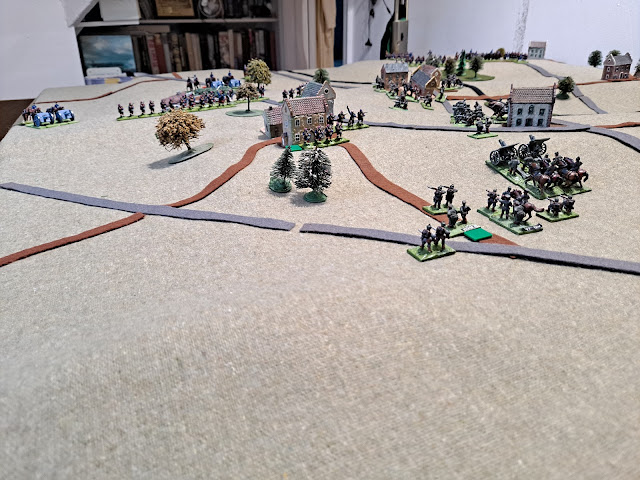 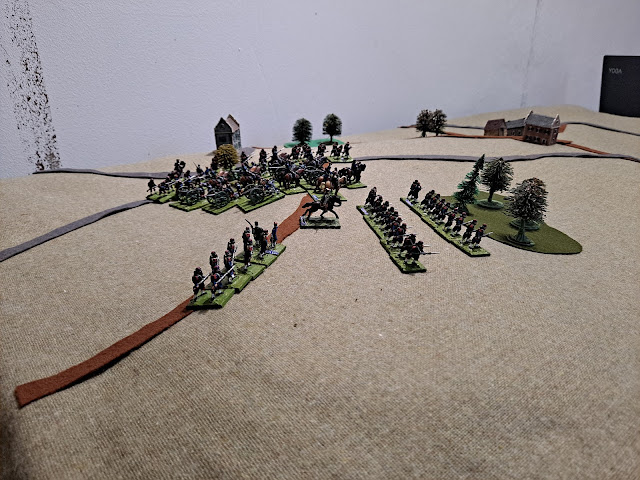 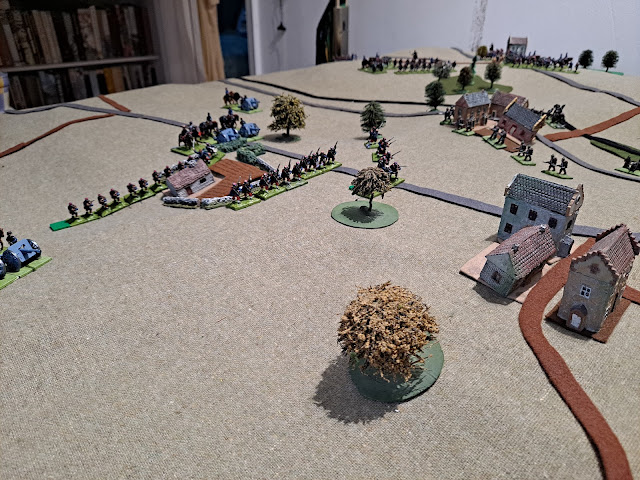 69th Res Div’s 138e Bde has a breakdown in command and control and fails to continue its advance, with the 287e RIR retiring. In MESNIL ST LAURENT 36th Div’s 12e IR receive punishing fire losing 2 cas and retire from the village. 35e IR also retire. BG Winterfeldt continues its retirement. Hvy How are redeployed to support BG Hochwachter in IRANCOURT from the NE of NEUVILLE ST AMAND. BG Winterfeldt’s arty is silenced and damaged.

15 Foot Arty Bn arrives with four 155mm btys and deploys to the NE of NEUVILLE ST AMAND alongside the other 2 How Btys. They open fire on the arty of 69th Res Div which has deployed to support their attack. BG Winterfeldt regroups. 36th Div stabilises its position and its regiments regroup. BG Hochwachter receives fire in IRANCOURT and loses a cas. 138e Bde again has command and control problems again with a regiment withdrawing. 137e Bde continues its advance to the right of 138e Bde. 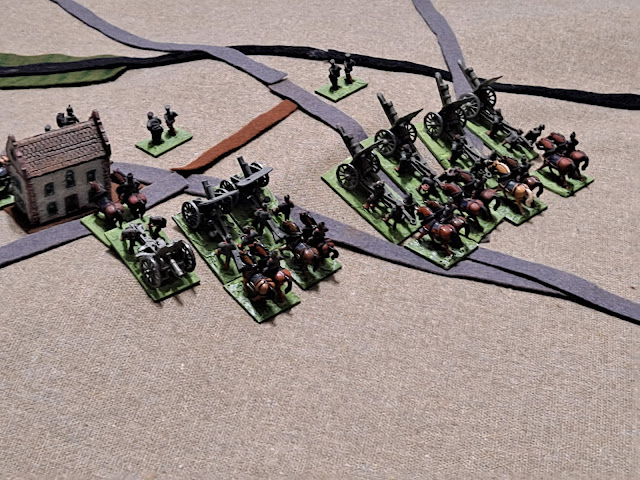 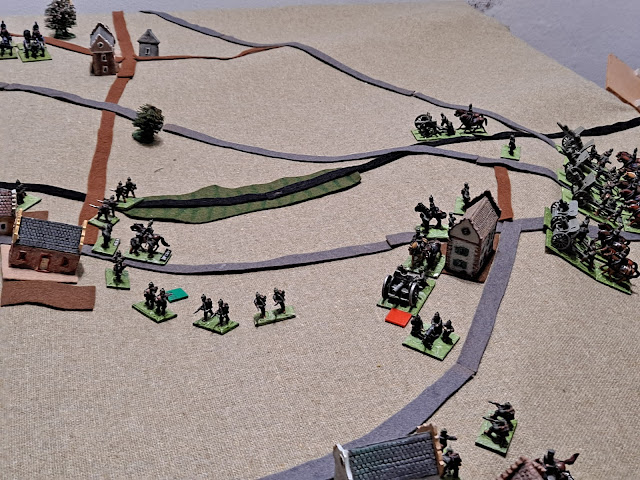 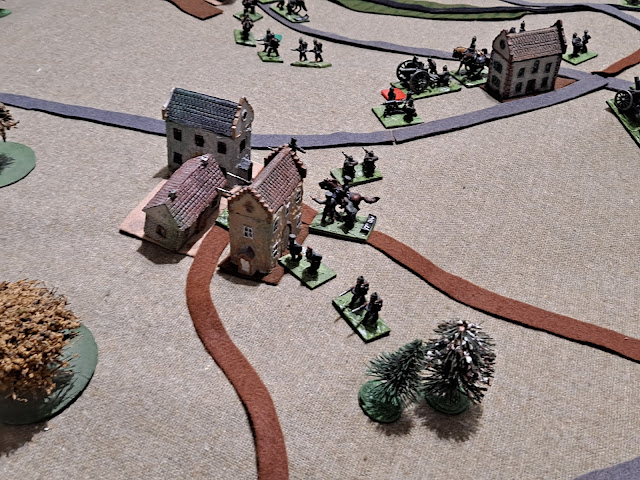 It is firstly very interesting that the overall outcome was as with the actual battle. Albeit that the Germans lacked the strength to counterattack in any great strength.

The rules once again played well. I think the Age of Eagles use of cohesion levels is very effective at constraining correctly the operations of both sides to the end of the game. This is done through the cumulative effect of losses that gives a negative factor to manoeuvre command dice rolls.

I also think this was balanced by the reduction in infantry firepower I applied at ranges beyond 4 inches. This meant that the longer-range fire combat was solely down to the impact of artillery fire, which again is entirely reasonable and correct.

I have to confess that I rather like these rules and they are starting to give me the flavour of 1914 combat. 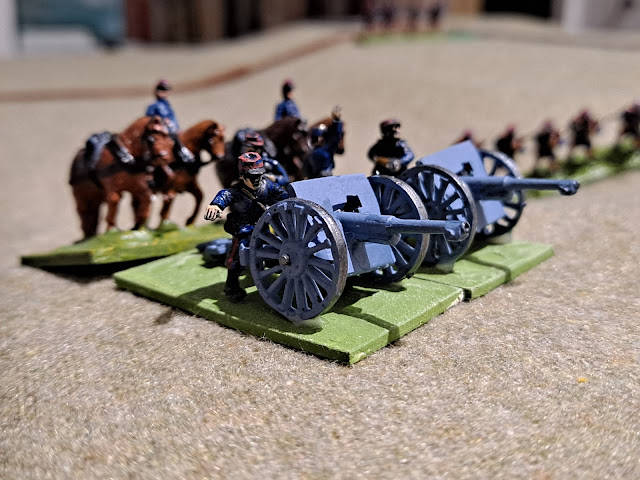 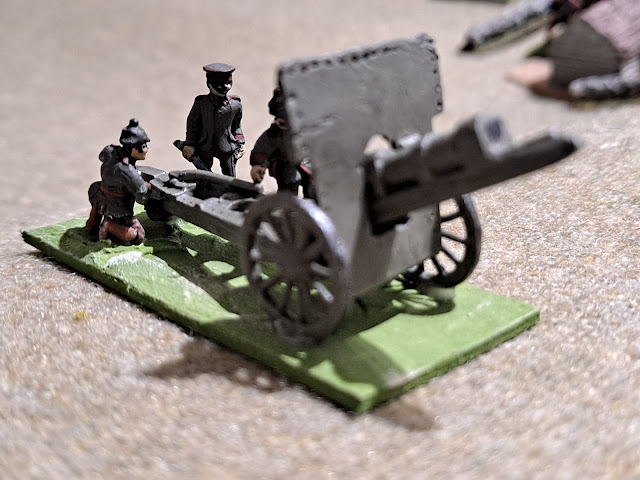