1809 Austrians vs French return to the Danube Valley

This was to be my fourth excursion to BE and Dave's first. The game was played by Zoom, which although not perfect was quite good. On deeper reflection before inviting Dave to play his first game a quick re-read of the rules by myself would not have gone amiss. We (read I) made a few howlers but none really materially impacted the game.

Dave's French engaged with 3 Divisions; two of infantry and a small light cavalry division with a Corps Artillery battery of 12lb and a divisional battery of 6lbs. All commanded by a brilliant commander (Marshal Lannes).
For my Austrians, were five divisions; two of infantry, a mixed vanguard division and a light cav division of dragoons. All my commanders were ordinary or poor. 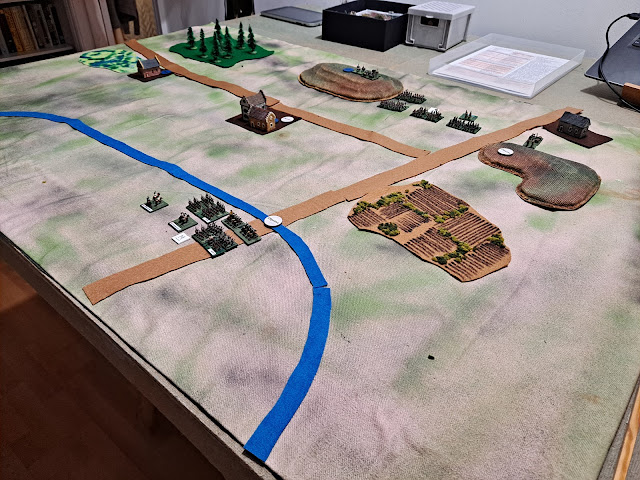 The terrain was interesting. We had a river, in fact a stream! The French had some nice terrain that would provide blocking positions. The marsh to the top left behind the building was in fact impossible pond. The battle type was an encounter battle. The French opted to have one of their two infantry divisions on with the Corps artillery reserve. While the Austrians chose their Advance Guard Division. 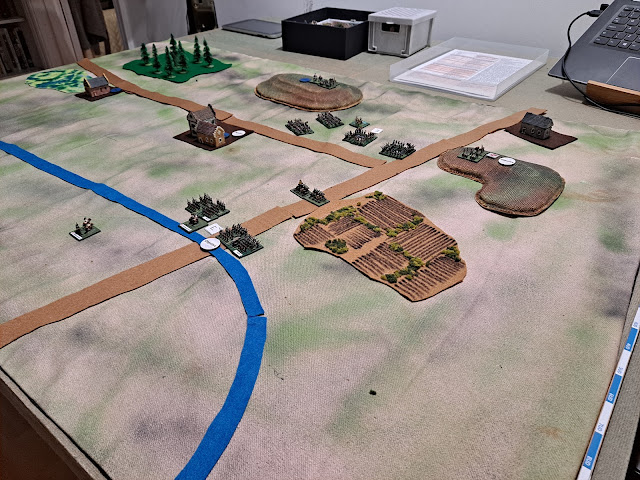 Both sides have given engage orders. The French have deployed into square with 2 regiments whilst the other two move to secure the village. The Austrians have seized their initial objective across the stream whilst the Cavalry move forward to threaten the French to cause delay. 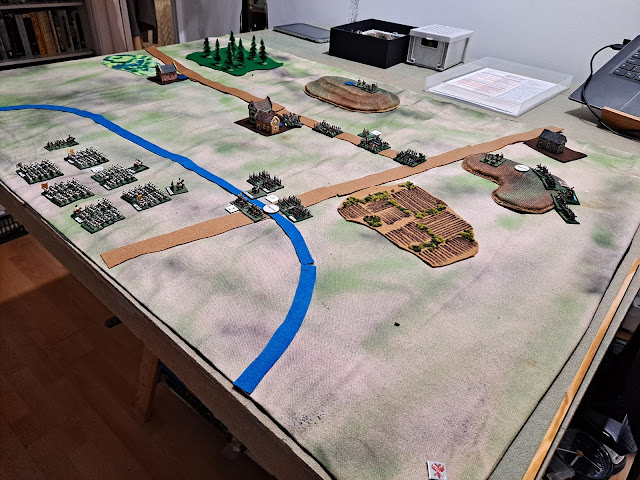 The Austrian light cavalry have withdrawn because of artillery fire. A timely withdrawal given the arrival of the French Cavalry to support the French left. The Austrian first main force infantry divisions have arrived in Attack column under attack orders. The Advance Guard Division has been ordered to hold the stream crossing. 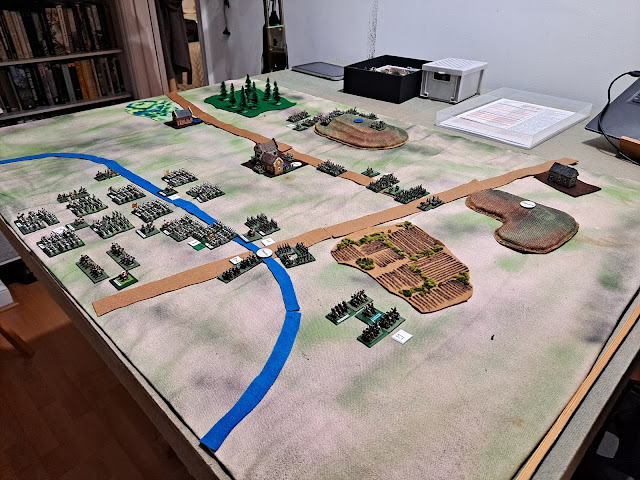 The first Austrian attack against the central building has been beaten back by the French. The Austrian Advance Guard have changed formation to defend the crossing against the French cavalry that have moved to threaten the Austrian right. Fortunately the remainder of the Austrian's have arrived including their Dragoon Division. The French 2nd Infantry Division has also arrived and is moving forward in support. 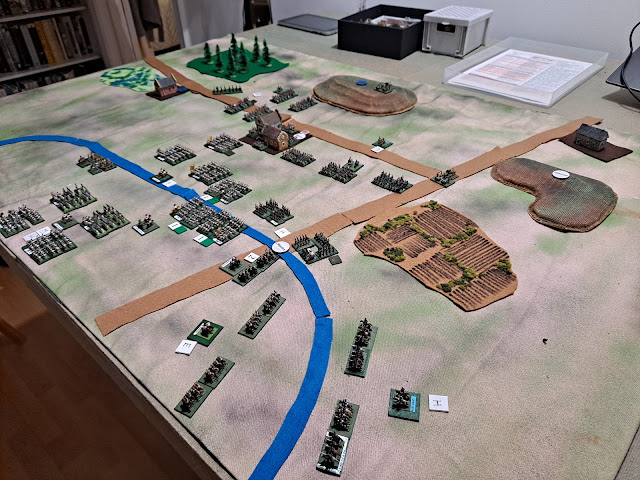 A second assault on the central building has been thrown back by the French. Along with the effect of this and the supporting fire from the French Corps artillery on other regiments of the division has meant that the Austrian 1st Division is in significant disorder. The Austrian 2nd Division is also having command and control problems (poor commander) and is failing to support the 1st Division. The Cavalry have reached a stand-off facing each other across the stream with neither side willing to risk charging across it. The French 2nd Division is now in close support to the 1st, with the Hessian Bde occupying the far building. 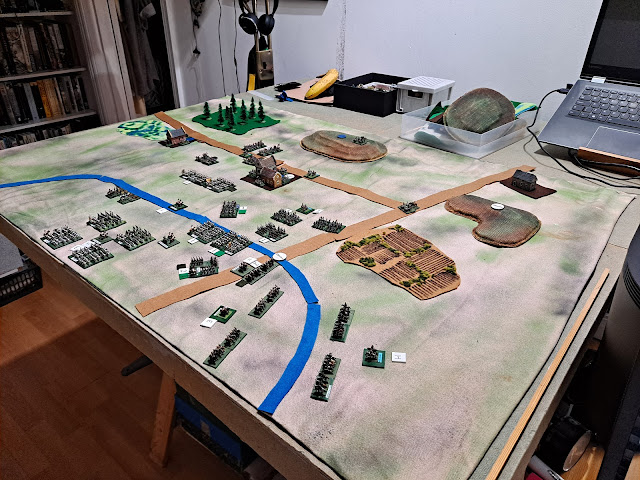 This was a crucial game turn. The French 1st Division on engage orders advanced to threaten the crossing and the flank of the Austrian 1st Division. More than threaten; a conscript regiment successfully attacked and then pursued the Austrians and destroyed two regiments. At the same time they also managed to use their artillery and muskets to drive the Advance Guard Division back over the stream. To the rear poor command and control and lack of ability to process an order change left the Austrian 2nd Division in the rear. The French 2nd Division is moving to provide support by providing the link between the two buildings. 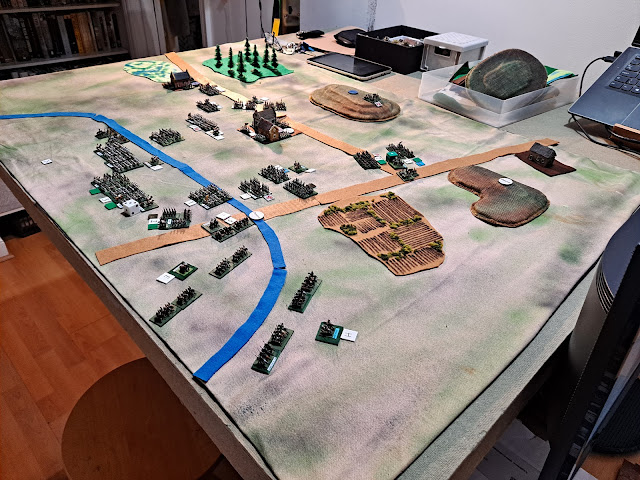 The third Austrian attack against the central building succeeds and they occupy the objective. In doing so the right flank of the French 1st Division has fallen back after being kicked out of the building and the successful conscript division withdrew with it to regroup. The French 2nd Division is now screening the Austrian's in the centre and bringing musketry to bear on the central building (light cover). At last the 2nd Austrian Division has started to advance, not without some difficulty caused by the disorder of another 1st Division regiment withdrawing under artillery fire from the French Corps Arty disordering one of its regiments. 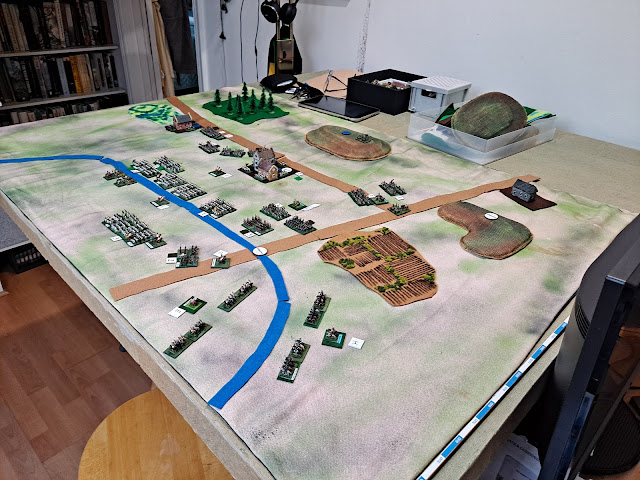 The regrouping of elements of the 1st French Division has been successful and at the same time they have maintained fire supremacy over the Austrian Advance Guard division, whose light cavalry regiment was destroyed by enfilade artillery fire. The advance of the 2nd Austrian Division is progressing with some difficulty as it reacts badly to French fire. 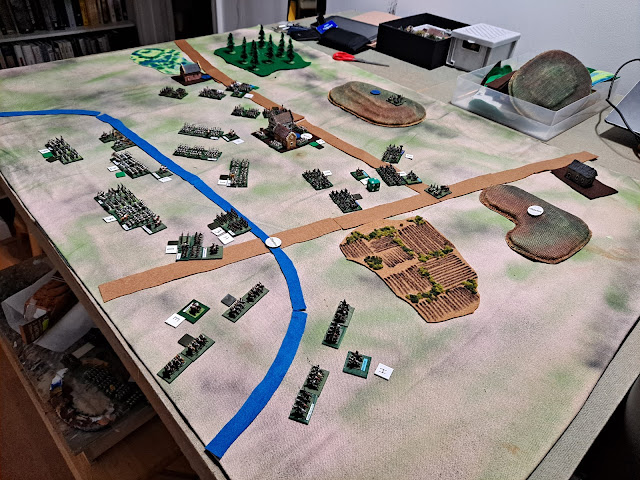 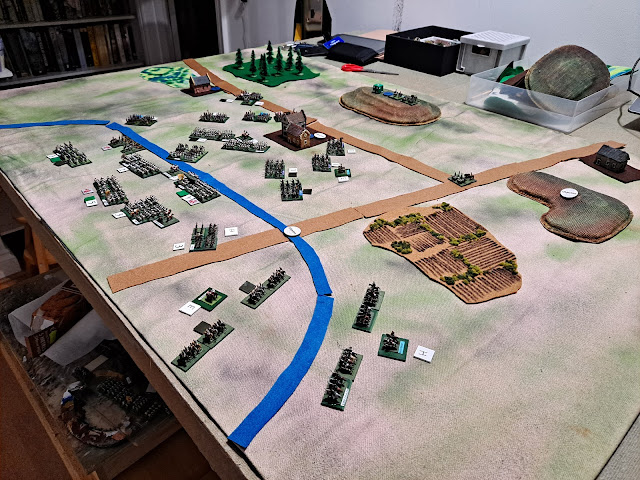 Indeed the writing had been on the wall for a number of turns. The Austrian regiment in the central building broke from the fire and fled to the rear. Meanwhile the French decided to advance to inflict the final blows through musketry fire. One of their victims saw them destroy a regiment of the Archduke Charles legion through fire. Austrian cohesion was broken and the field belonged to the French.

at December 15, 2020 No comments:
Email ThisBlogThis!Share to TwitterShare to FacebookShare to Pinterest
Labels: Bataille Empire

Back to gaming at Entoyment after lockdown saw me feild a Burgundian Army. A nice opportunity to get some heavy metal to the table. I was fighting Paul's emerging KoSJ force. The photo's are all courtesy of Paul as I forgot my phone, well it is better than forgetting the rules which I did last time out! 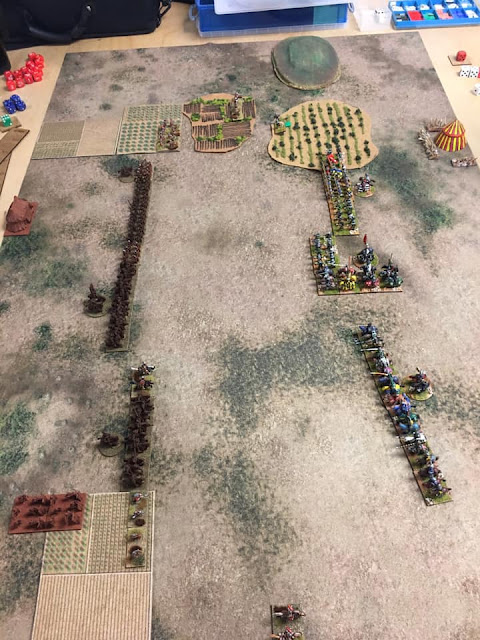 At the end of game turn 1 I was struggling to make space for all my knights. The central group of 4 have yet to wheel and then do a quarter turn to the left to face the enemy. 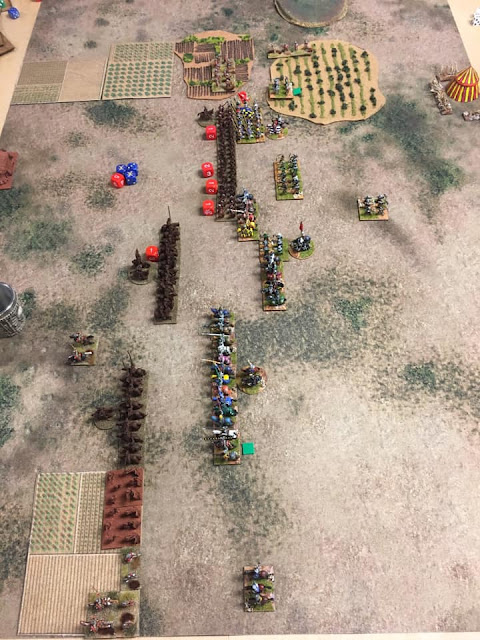 My longbows and crossbows were having some good effect in disrupting his infantry in the centre. My right flank crossbows in the plantation fought gallantly until it was overwhelmed. In the centre the lights have made contact with the heavy spearmen.