1809 Austrians vs French with swapping sides

Dave suggested that we change sides for another game. He would take the Austrians and me the French. As before the game was played over Zoom. This is a reasonable way to play, but it would be much better if there was a better depth of view on commodity webcams!

For this battle we decided to forgo the full restrictions of the Army lists in order to blood new troop types and to experiment a little. For the Austrians Dave decided on the typical Advance Guard Division with 2 Grenzer Regiments and 2 light cavalry regiments (one was Uhlan), supported by a battery of 6lbs. His line division had 4 line regiments supported by a battery, and a further mixed division of Grenadiers and 1 cuirassier regiment. With a Corps reserve of a battery of 12lbrs.
For my French I had three divisions. 2 Infantry divisions with respectively 4 and 3 regiments of infantry, both supported by divisional batteries. The third division was a mixed cavalry division of 2 cuirassier regiments and a Ch a Ch regiment. Corps reserve was a battery of 8lbrs.
As you can see we tried for a historical deployment of artillery that exceed the recommended norms of the Army List rules.
All the pictures are taken from behind the French right flank 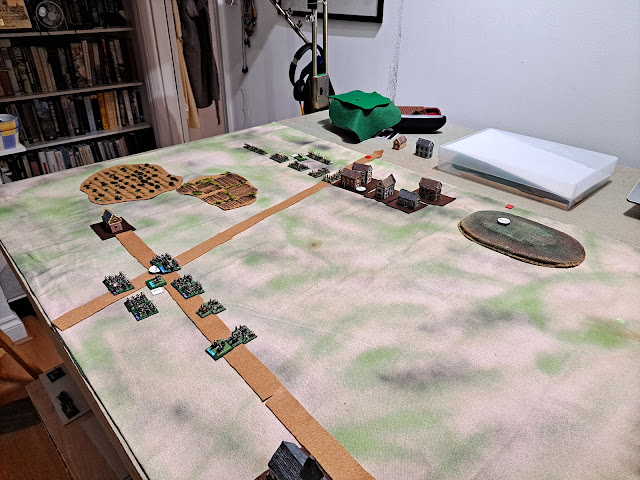 This became an encounter battle. The terrain as you can see was more open than the previous game, with a wide open French right flank; ideal for the French cavalry was my initial thought. What I failed to appreciate, but which Dave did appreciate, was that the field system with its low walls and the medium cover of the village would provide a strong defensive position for his Austrians! 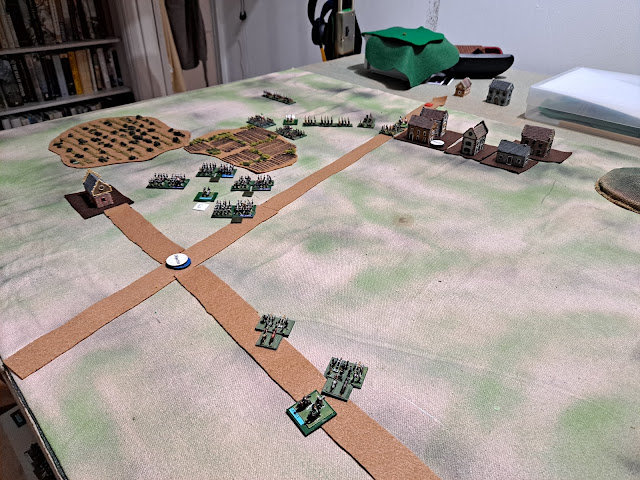 On Game Turn 1 both sides maneuvered to secure the field system. The Austrians under Move Orders to secure the wall edge and being closer gained their position easily. The French under engage orders are moving forward to contest the ground with engage orders. 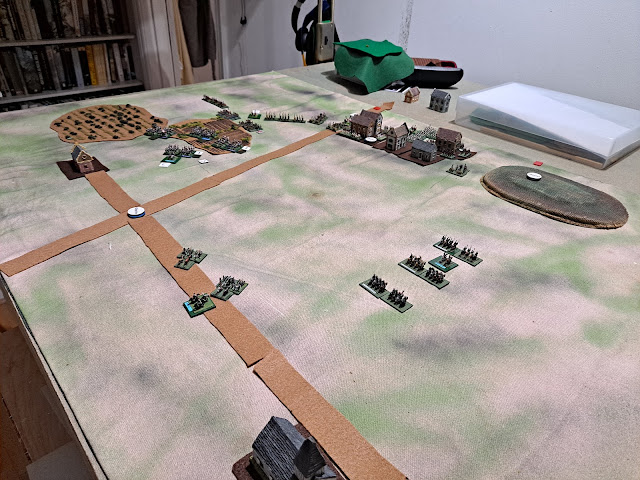 First in the French Order of March was the cavalry division with engage orders to secure the right flank. For the Austrian's there first reserve to arrive was the infantry division with orders to secure and hold the village. Their artillery deployed forward supported by the troops in the village.
The French artillery in the centre tried to bring counter-battery fire to bear, with limited success scoring an attrition result. On the French left the context for the field system has become bloody. The Austrian artillery has already caused some losses to the French regiments. 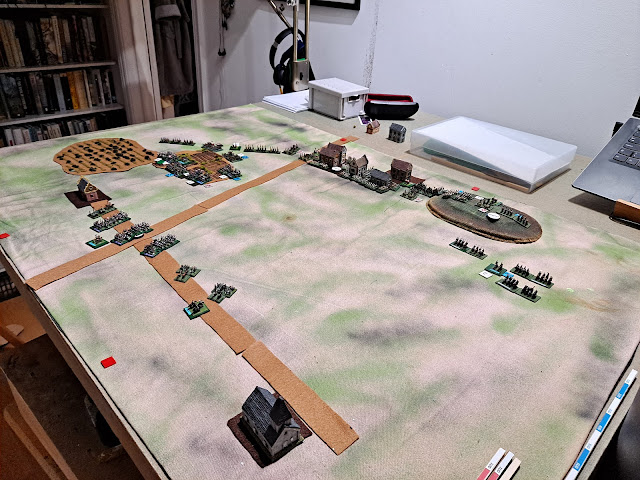 The final reserves have arrived. The Austrian mixed division has arrived to secure the hill. While the second French infantry division has arrived to support the attack on the left.
In the centre the Austrians have secured the village. With further counter-battery fire with no effect.
The initial attack on the left has been thrown back after a fire fight with the Grenzers, with French suffering more casualties.
On the right the French Cavalry are maneuvering to get around the flank of the Austrians. 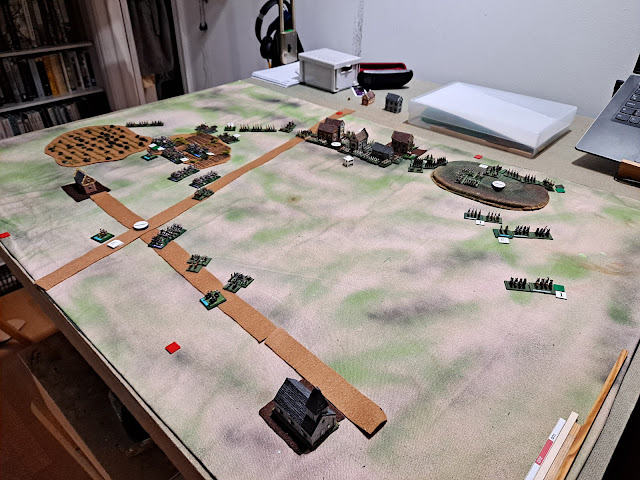 On the left the French 1st Division is regrouping after its initial attack. It has now lost a regiment due to the effects of fire and poor morale results. Meanwhile the 2nd division moves forward in support.
In the centre further counter-battery fire is unsuccessful.
On the French right flank the initial contact has seen the Austrian cuirassiers retreat from the melee. While the Austrian cavalry start to take losses from the artillery fire. Both batteries now have intimate support from their infantry - a lesson learnt from a longer read of the rules! 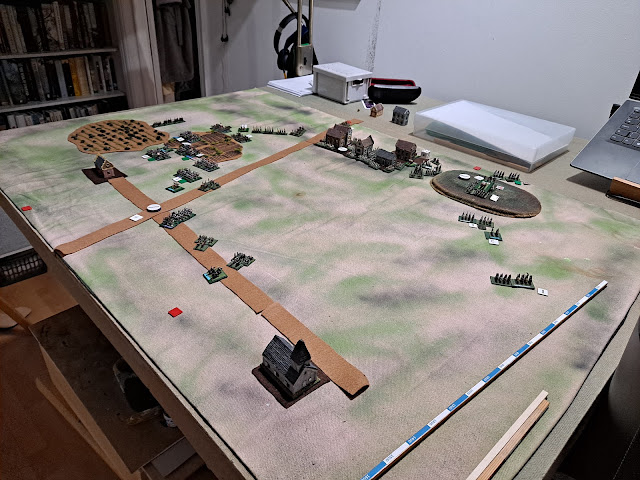 On the French left the regrouping continues with the 1st Division with attempts to restore cohesion after the loss of a regiment on turn 4. The 2nd Division's move forward has been halted with a change of orders to hold where it was.
In the centre the counter-battery fire has delivered some results with causing an attrition result resulting in a morale test which was failed, causing the Austrian 12lbs to limber and retire.
On the right flank the French Cavalry charged the disordered Austrian Cuirassiers which fled and left the table. Interesting point is that in their pursuit the French Cuirassiers would have also left the table, but there is nothing in the rules (nothing that we could find) about what happens when pursuers leave the table. We decided that they stay on the table; a question for the forums me thinks. The Austrian artillery continue to inflict losses on the French Cavalry pushing them back. 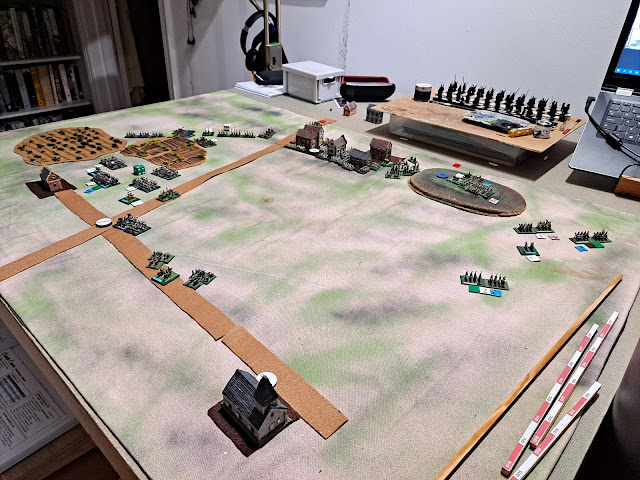 On the left the French have decided to retire the regroup and avoid further unnecessary losses as they lack the numbers to break through.
On the right the French cavalry are trying to regroup in the face of punishing artillery fire from the Austrian batterys. 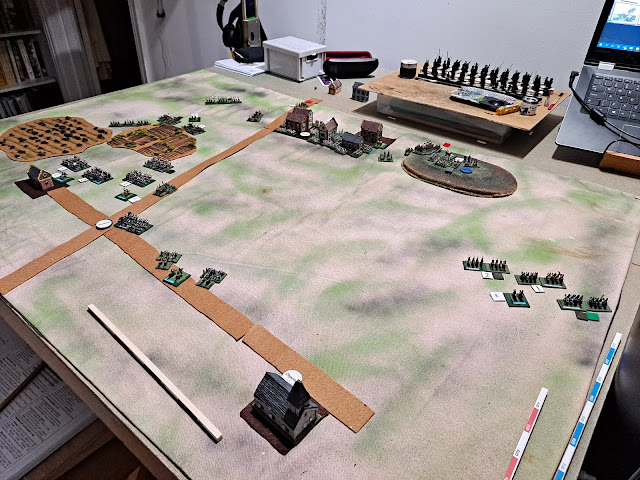 Final exchanges of artillery fire from both sides tried and in some case succeeded in inflicting further losses as the French are committed to withdrawing from the battle. The Austrian's decide to hold in their defensive position.
Final outcome was a marginal Austrian Victory. Which from the Austrian's perspective must be counted as a win!