I have recently become a convert to ADLG so I therefore thought I must try Bataille Empire (BE). All my figures for Napoleonics are 6mm. Therefore I hummed and hawed for a while on what UD should be given my troops are based on 25mm frontage bases. For this game I chose 1UD=25mm, a small change from the BE standard but it seemed to work well.

The troops I chose were for the 1809 Danube Campaign French vs Austrians. 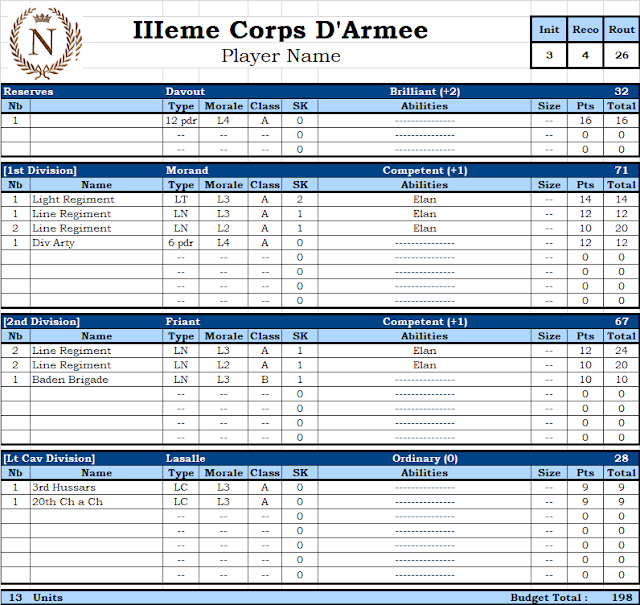 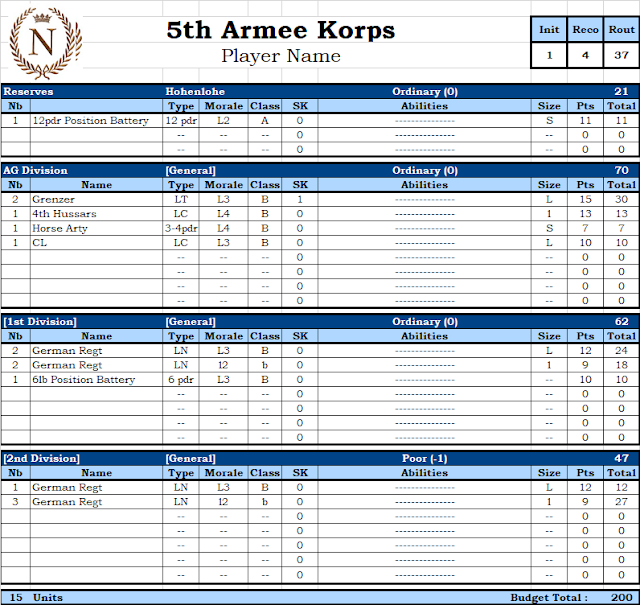 I am still a little confused and concerned about representative scales to be able to refight real battles.

It seems when playing that the units more appropriately represent brigade and regimental level rather than battalions and cavalry regiments. Even so the ground scale does not really reflect this scale, nor does the amount of artillery. Specifically, I am concerned about artillery scale in the game as in spite of the rules recommending certain numbers of artillery per unit per nation the final allocation seems a little light and does not reflect real engagements.

I think a little more clarity on ground scale and unit scale for the rules to allow historical refights would not go amiss.

All that have being said. The overall points balance and force mix I chose gave a good game.

I quite like the terrain selection rules. They seem to work well. I think however, that the variety of ground across Europe for the campaigns needs a little more detail. The terrain in the Danube Valley in 1809 is very different from Flanders at the same time! Therefore having different terrain selections for campaigns might not be a bad addition to the rules. In 1809 around Regensburg in the Danube Valley I would have expected to encounter more woods than I did!

With the dice rolls I generated an encounter battle. This shows the starting point for game turn 1

Both sides had one division deployed. 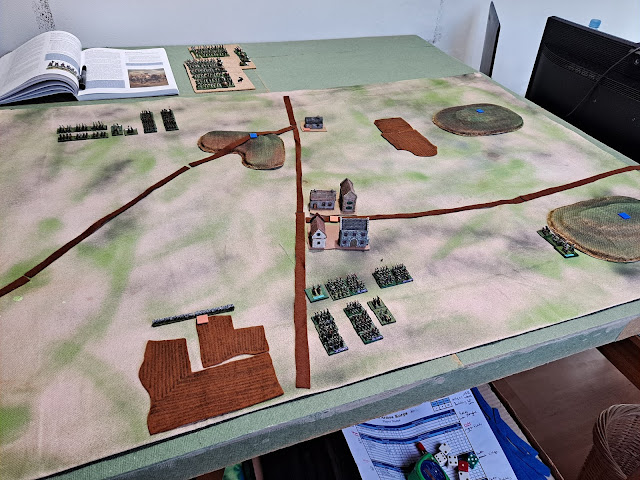 The French move to secure the village as an objective. Meanwhile the Austrians Advance Guard Division advances with engage orders to secure the field. 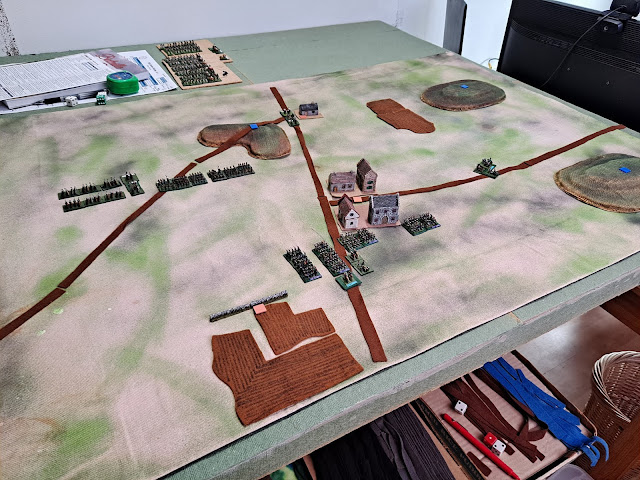 The French division attacking the Village manages to secure half of the village. Poor command dice prevents them occupying the entire village. Meanwhile their Light Cav Division has arrived with engage orders to protect the left flank of the attack on the village.

The Austrians continue to advance to engage their objective. In doing so they confront the two flanking French Regiments and punish them with fire disordering them both. The Austrian 1st Division has arrived with attack orders to secure the village. 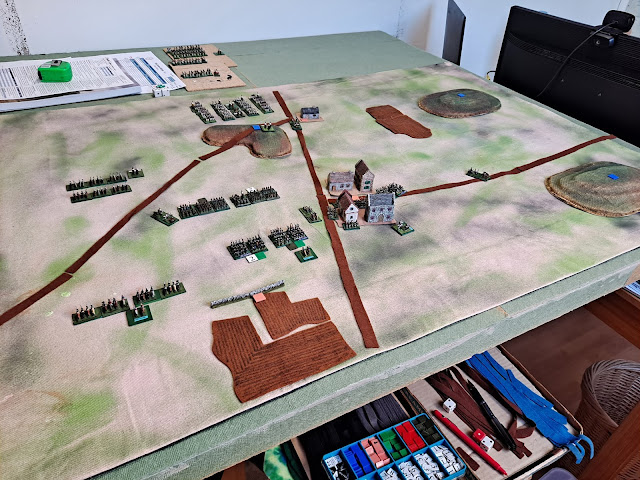 The French 1st Division orders are changed to hold, the disordered regiments rally. On the left flank the Austrian Light Cavalry charges and is counter-charged by the French. The French are beaten back and the Austrian Cavalry withdraw to their cannons.

In the centre the Austrian 1st Division has good command and control and manages to make a double move to its objective.

The French 2nd Division has arrived and moves fast with engage orders to their objective the hill in the Austrian position.

The Austrian 2nd Division has arrived to hold the Buildings. 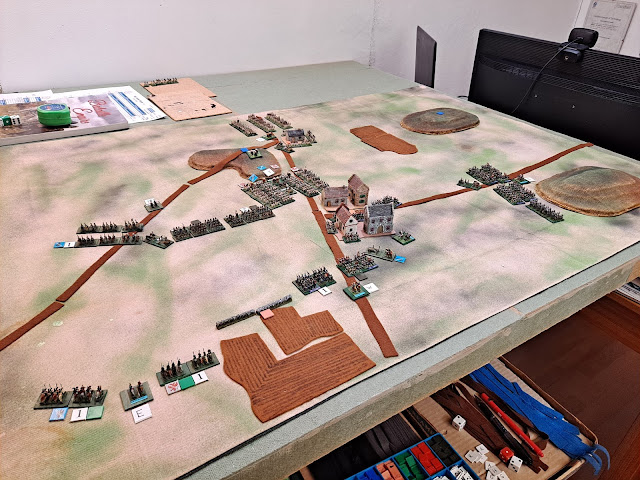 The French in the village throwback the initial Austrian assault. The cavalry reengage this time the French win the combat. 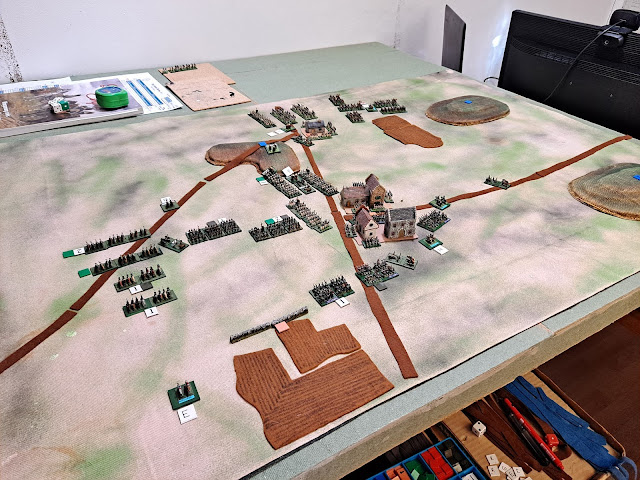 The third engagement between the two cavalry forces sees the Austrians come of best and destroying both French Regiments in the pursuit. 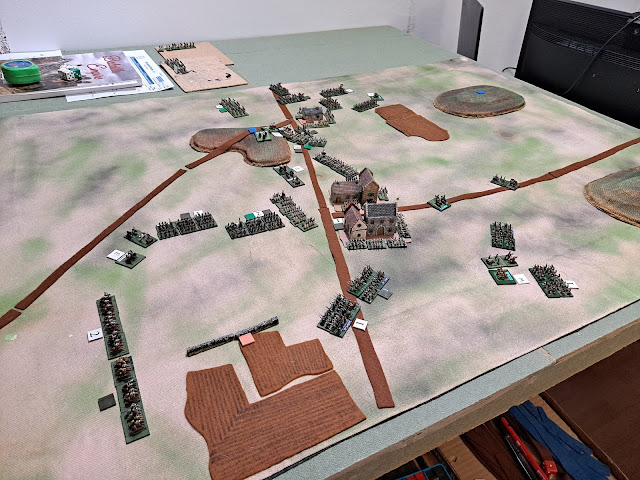 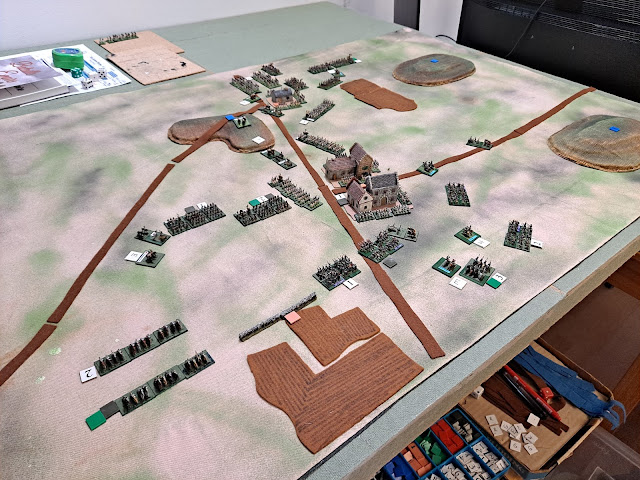 The French 2nd Division has successfully charged and destroyed an Austrian Regiment. The Flanking regiment is again punished by the French artillery and retires disordered.

The French 1st Division orders are changed to withdraw, to save casualties.

The Austrian Advance Guard has secured its objectives. Poor command and control has prevented the Grenzer regiments supporting the cavalry on the objective.

On counting all the casualties, the Austrian force has 21.5 and the French 10. The Austrians suffer a crushing defeat, despite taking their objective, and would have had to retire to their right rear away from their lines of communications.

On balance I can live with these rules. They are quite fun and give a good game.

One of the things I mangled in the rules was, if you look closely, that the large Austrian regiments were not in the correct column formation. Here I think a one element wide column makes more sense, but not according to the rules. It might have made a little difference in the attack in the centre, but not hugely so.

The other is that I am not sure I played the cavalry charges exactly to the rules, but I think the outcome would have been the same.

The large Austrian regiments are resilient, but require a lot of space in which to deploy.

The Austrian poor command and control makes them very challenging to play with.

I like the feel of these rules in 6mm scale. It feels like a Corps level engagement with the units representing regiments. Next time I think I will revert to 3cm per UD I am not sure that the odd 5mm makes that much sense; not least because once the forces were deployed I remembered that my cavalry are based on 3cm frontage!

I think I would like more terrain on the battlefield.

Battlefields of the Pyrenees 1813

The Battlefields of the Pyrenees

Some 30 years ago now I was on holiday in the southwest of France and I took the opportunity to visit the battlefields of the Pyrenees fought over by the French and British in 1813. I thought it would be good to share the pictures I took then, as these battlefields are off the beaten track.

I was curious to see the actual terrain that these battles were fought over. Particularly the Battle of Sorauen as I wanted to refight it at some stage, which I did relatively successfully using the WRG rules in 6mm.

The journey to Sorauen and then onto Pamplona for a late lunch started on the French side of the Pyrenees at Saint-Jean-Pied-de-Port, and then south through the Pyrenees. 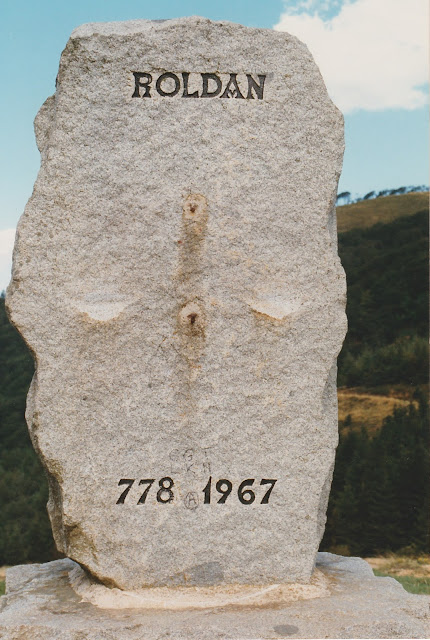 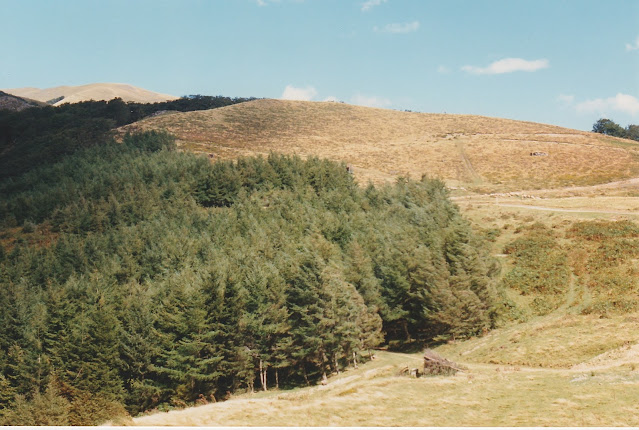 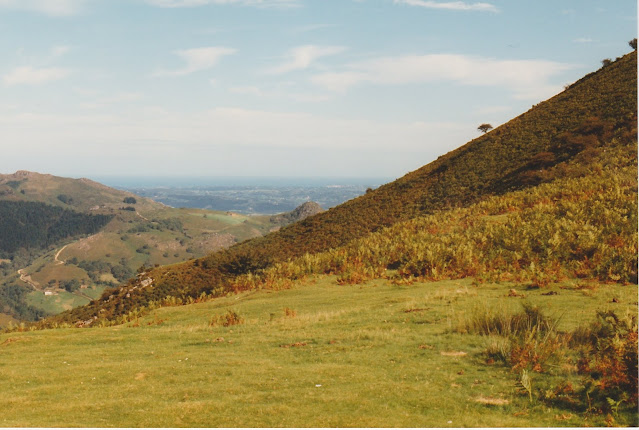 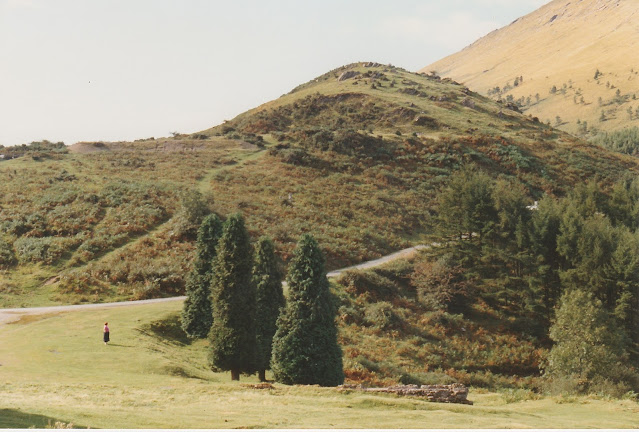 As near as I can recall the pictures were taken from a few hundred metres west of Sorauen village looking south to the British position at 42°52'03.6"N 1°36'17.8"W; please bear with me as it was 30years ago! A final point of course is that the hills in these pictures it goes without saying that all these woods are young woods and it is unlikely to have been as wooded in 1813!

Firstly, before that location this is looking south on the road running south in Sorauen. The British would be on the hills to the front 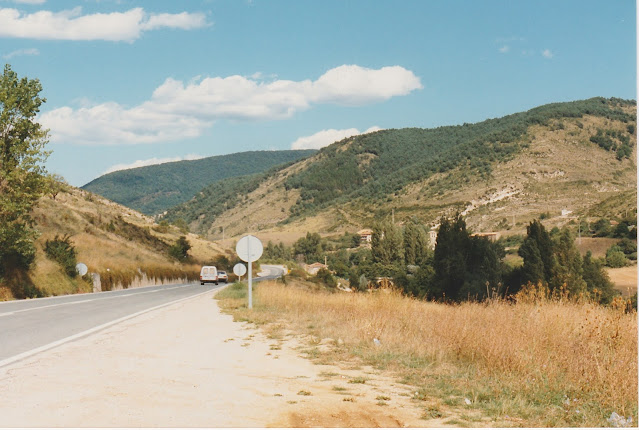 This is looking east from the location. It would not have been possible for Soult to easily move to outflank the British from the East. 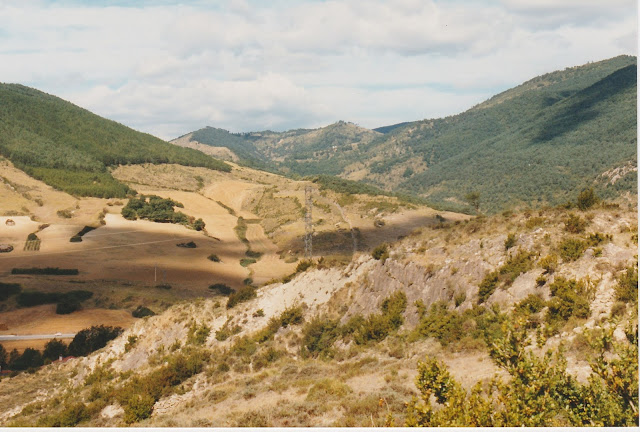 This is the valley to Pamplona to the south of Sorauen. The British 6th Division arrived from the valley in front of the wooded hills in the distance and over the hills immediately to the front to reinforce the British position and threaten the French right flank. 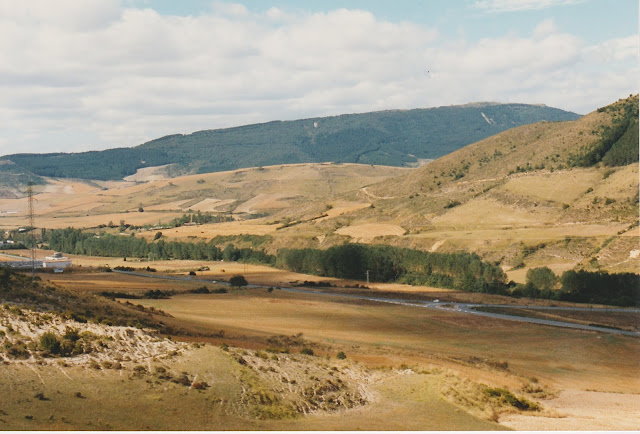 This is looking south and west to the main British Position. The French would have had to descend from where the picture was taken to the small valley floor immediately at the foot of this picture and then they had a long advance over broken steep terrain to reach the British at the top.

This is looking west to the col that is to the west and north of the British position. Beyond this is the valley that the French also came down to advance on the position. The col also forms part of the ridge line along which Foy retreated on the 30th July. 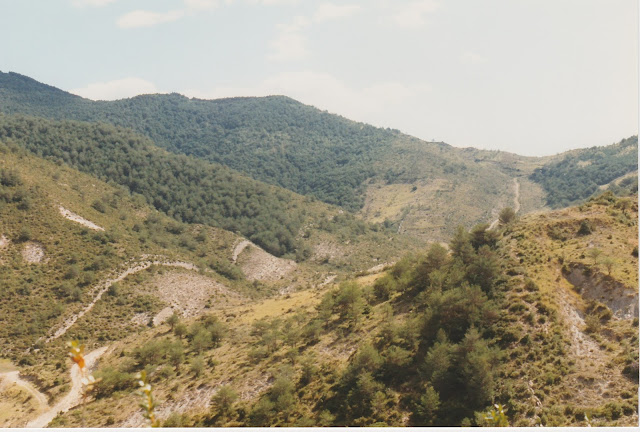 The final two pictures give a better appreciation of the depth of the valley to the front of the French position and the steepness of the rise to their front to the British position. 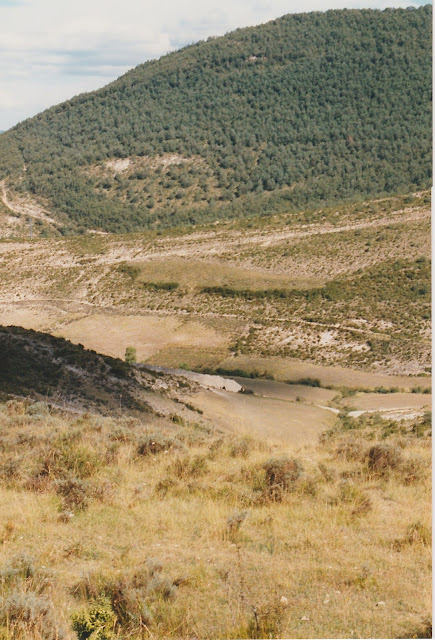 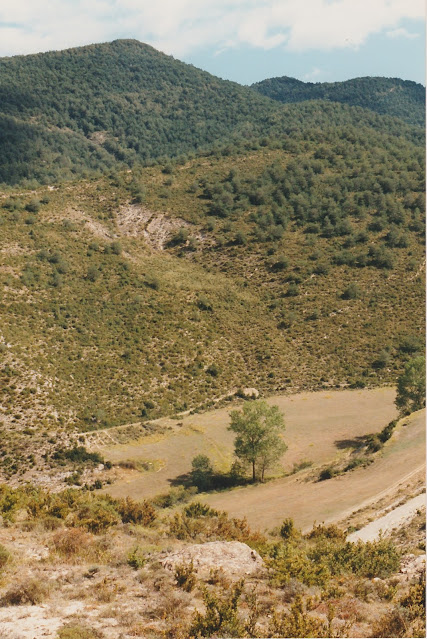 at September 25, 2020 No comments:
Email ThisBlogThis!Share to TwitterShare to FacebookShare to Pinterest
Labels: Battlefields

I have an ADLG Flemish Medieval Army and I was about to be confronted with fighting some Ottoman Turks who have lots of cavalry and I don’t! I thought it would be best to invest in firepower to counter the enemy’s mobility. I couldn’t wait for a mail order delivery. Therefore, lacking the models for the Organ Guns, I decided to build my own and use some spare medieval figures for crew.

Components found in my spares boxes

Here are the components I used to assemble the models.

Can you spot the pieces! 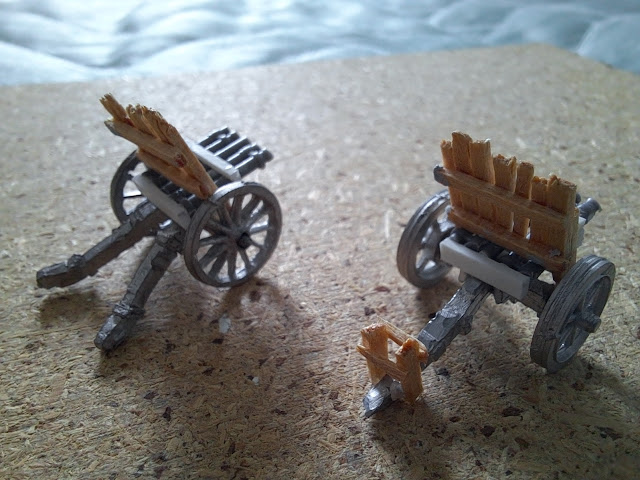 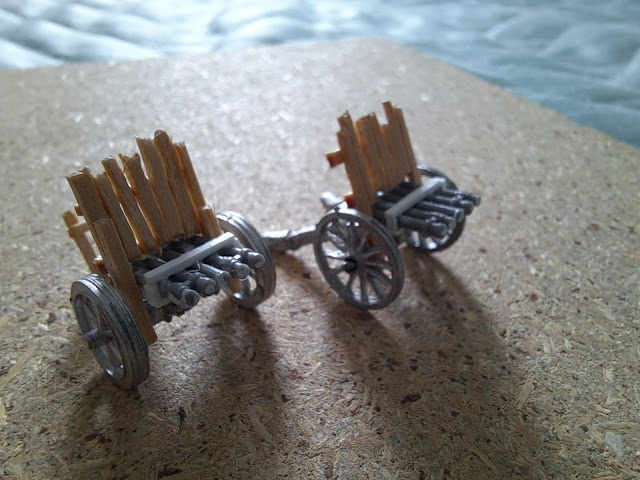 Here are the finished articles: 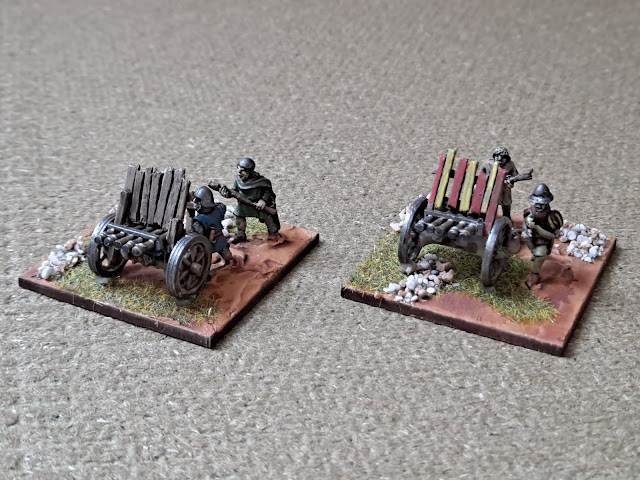 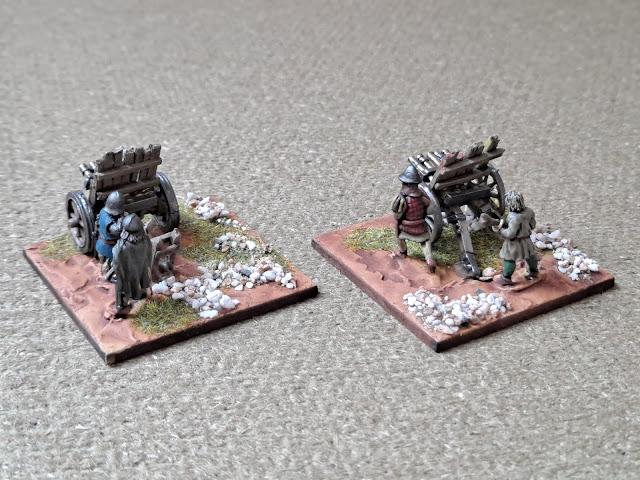