Before the Leaves Fall - Test Game

WW1 Wargame - A test of "Before the Leaves Fall"

I have been trying to find a relevant set of wargame rules for the early part of WW1 for about 22 years! I wanted to play at the Divisional and Corps level using 15mm figures as I rather like the Peter Pig range. As an aside I might have gone for 10mm if they had been available when I started.

I am a fan of Brigade level ACW Fire and Fury (using 10mm). I also like the variants that Colonel (Retd) Wilbur Gray has produced for 7YW, Napoleonic’s, 1870 through to now WW1. They seem to support the level I like to play at. Rather than worry about the nuances of a battalion or cavalry regiment one commands brigades or regiments. I am more comfortable dealing with the Brigade and regimental level where the battalion level detail is somewhat abstracted.

Consequently I have been playing around with the variant for WW1 – Before the Leaves fall (BTLF). I was not initially in favour as I didn't think the rules were sufficiently different from 1870. I have, however, introduced a number of refinements that I think help give a better flavour of WW1. These include an open order formation for infantry and dismounted cavalry. The ability to dig-in during the game – shell scrape level, not full stage 2 entrenchments with overhead cover! Changing the figure scale to suit my basing. Some off-board refinements for indirect fire support from Corps level assets.

All of this is wrapped up in my computer moderated solution that provides some measure of solo play ability by making command decisions for the commanders.

I had a test game and I thought I would share my findings and the photos.

The overall game seemed to play out in a Mons-like way. The Brits defended the river line with three brigades up and a cavalry Brigade in reserve, with artillery distributed along the front. The German Corps committed a brigade of 2 regiments against each bridge with most artillery support concentrated on the centre bridge. The game lasted 13 game turns from 1000 to 1530, and was a narrow tactical victory for the Brits who only vacated their defences towards the 12th turn around 1500. 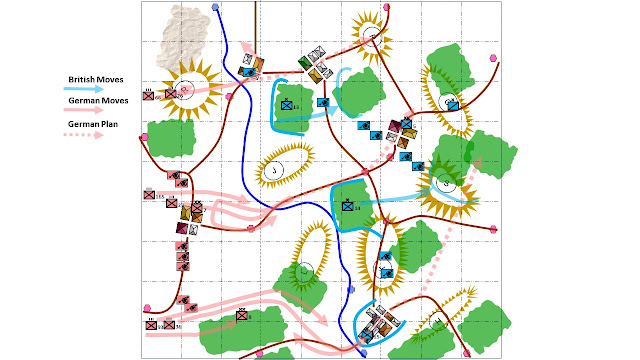 It might have been very different. The German Brigade on the left had real problems. It managed to advance to the first hill in open order, and there it stayed or retired from it for the next 9 turns! Rolling usually a 1 or 2 on the March Table every turn! By the time it started to move it charged across the bridge in open border, overran an artillery battery in the village and then proceeded to abandon all of its gains and retire twice northwards away from the bridge. Meanwhile the Brigade’s reserve regiment came on and then dillied and dallied around on the hill on the German side of the river exactly as the lead Brigade had done! 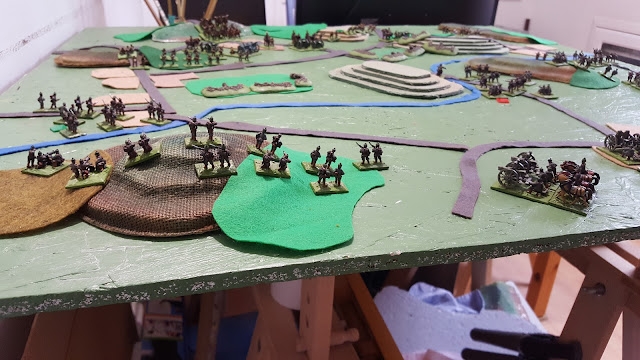 Looking from the German left flank. The Regiment in open order are the ones who were dillying and dallying around! 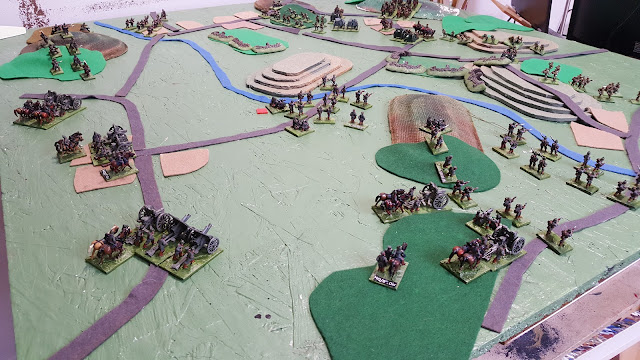 Overall, the game, less scenery which I did in haste, was a reasonable success and I am now more confident that the rules with the refinements might well be a working solution for the period.

The map is autogenerated randomly for me by a little application I wrote in Powerpoint.